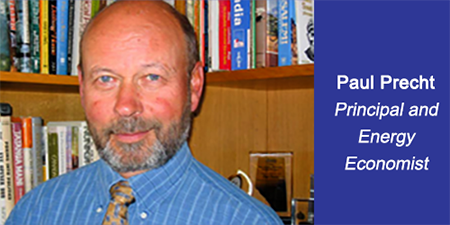 Paul Precht Energy Economics (P2) is a Canadian consultancy in energy economics working at the intersection between governmental energy policy makers and the private oil and gas industry.

It seeks to foster resource development by:

Paul’s experience, including over 20 years with Alberta Energy, provides a solid foundation for the work of Paul Precht Energy Economics Ltd, with highlights that include:

Paul Precht Energy Economics Ltd, the company he founded in 2000, is a consultancy focusing on energy economics.
It specializes in the application of economic analysis and policy analysis to energy management and development issues, in Canada and internationally. The company works both independently and as a member of consortia and teams. As a consultant, Paul has worked in many jurisdictions in Canada as well as internationally in Latin America, Africa and Asia. His work extends to:

A small sampling of some highlights from Paul’s consulting work include:

For more information on the nature of his work and how he can assist you in issues you are facing, please contact Paul directly.

What Paul is Reading

I am an avid reader. For a number of years I sought to share about some of what I was reading on my website, posting book reviews that might prompt others to pick these books up. While I continue to read, I have found in recent years that I have not been as motivated to write and post reviews.

The result was that my website included a number of reviews of books that were somewhat dated, to the point it was becoming a bit of an embarrassment to me. So I have decided to delete these book reviews and replace them with something briefer and more current, which I shall seek to update periodically.

Following are some books I have recently read, with some brief annotations and in no particular order. If you live in Edmonton vicinity, I’d be happy to get together to discuss. I may even lend you my copy.
I tend to buy hard copies, maybe because that’s just what I’m used to and most comfortable with. Don’t hesitate to get in touch.